If you want the best gaming experience possible, you’ll need the best peripherals you can get. One of the absolute most important is your keyboard. This list covers my top 5 best gaming keyboard picks for 2020.

Picking the right keyboard is going to make or break your experience when it comes to PC gaming. That’s why it’s undeniably smart to do some preliminary research beforehand!

I’ll keep this list updated throughout the year if any major releases happen. But, without wasting any more of your time, let’s get down to the list!

There are picks from the best budget combo, to the best value “high end” mechanical keyboard, so you’ll definitely find the one that’s right for you.

Picking the right gaming keyboard comes down to which one offers the features that you need, and a style that you like. There’s no point in wasting money on something you don’t like the looks of just because someone says it’ll perform alright!

You should definitely judge a keyboard based on it’s specs first a foremost, but beyond that you really want it to be something that you’ll actually enjoy using on a daily basis.

These 5 keyboards are definitely some of the best keyboards you can get for anywhere in between $30-$100+. I’ll be sure to do an ultra-budget list at a later date including keyboards in the sub-$30 price range. 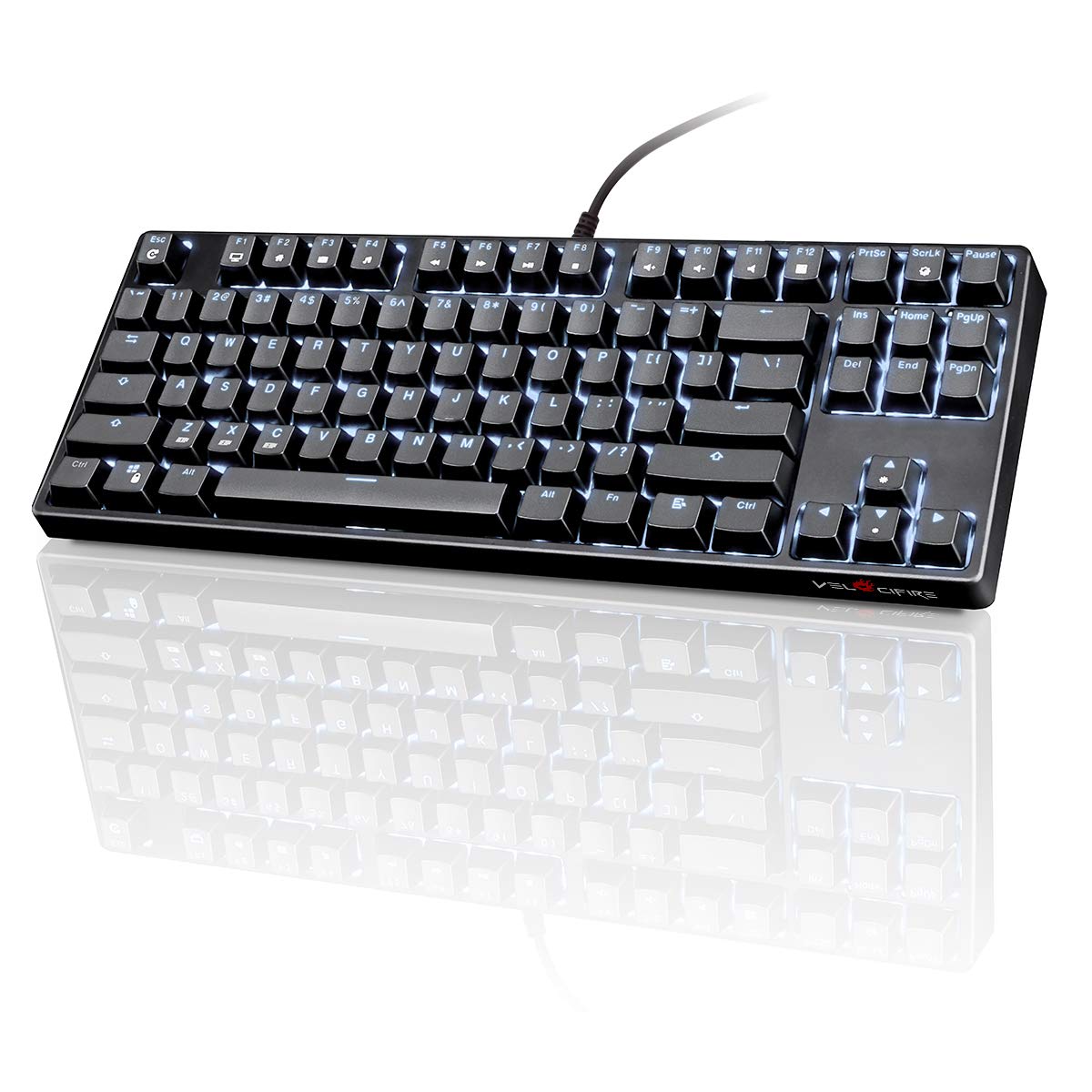 The Velocifire TKL02 87 key mechanical keyboard is a great choice at the budget level. But, if you’re looking for a numpad you’ll have to look to a 104 key option.

It’s definitely not using high-end switches comparable to Cherry in any way, but that’s not to say that the switches on this keyboard are bad or even close to. They’re about as responsive as you would expect a cheaper mechanical switch and do offer a nice “clicky” feedback.

There are your typical FN shortcuts for media control which is nice to see, and this board actually offers full 87 NKRO which is also great at this level. This board is wired and uses your standard USB 2.0/3.0 connection.

In my opinion, this is a great entry-level / budget board for just about anyone who’s looking for a cheap 87 key gaming-grade keyboard. If nothing else, it’s easily your best option as far as mechanical keyboards for less than $40 go.

All in all, the Velocifire TKL02 is a great choice for anyone who’s looking to grab a cheaper mechanical keyboard.

It doesn’t offer the highest quality switches, or RGB backlighting, or anything outside of the core essentials – but it’s mechanical and it’s definitely on the more cost-effective end of the scale. 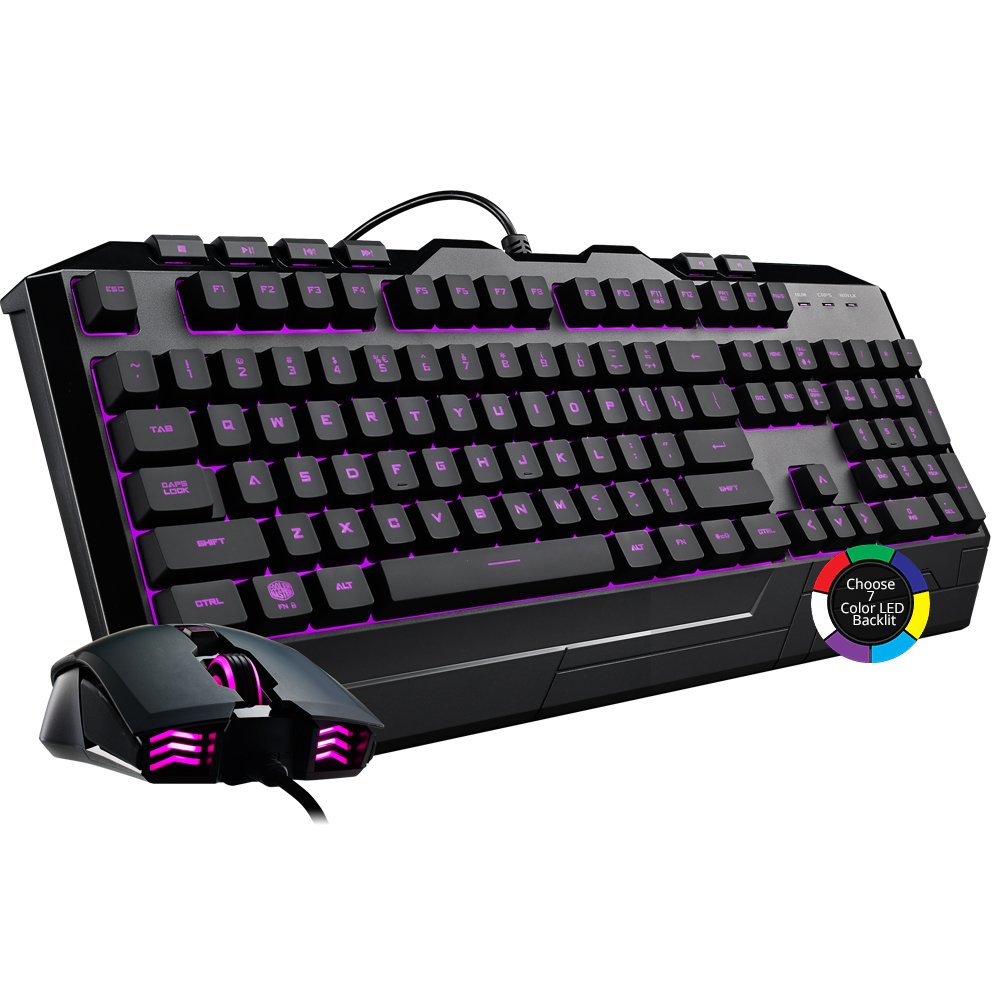 The Corsair Devastator 3 combo is great deal for both a matching keyboard and mouse.

Although the Devastar 3 keyboard is one of the few options on this list sporting rubber dome keys, they still feature a somewhat tactile feedback. It’s not the exact same feel as mechanical switches, but they come fairly close.

Although this page isn’t about mice, I have to mention the mouse in this combo. It’s not going to blow your mind, but this little 5-button mouse is actually pretty good. It features Omron switches and an Avago sensor meaning it’s using well-known internal hardware.

The Devastator 3 combo does come with backlighting, but it’s not full-RGB. There are 7 set colors that you can toggle between on both the keyboard and mouse.

As far as good gaming-oriented keyboard + mouse combos go, Corsair’s Devastator 3 is definitely up there among the best options. The price is reasonable for what you’re getting and the features you need are (mostly) all there. 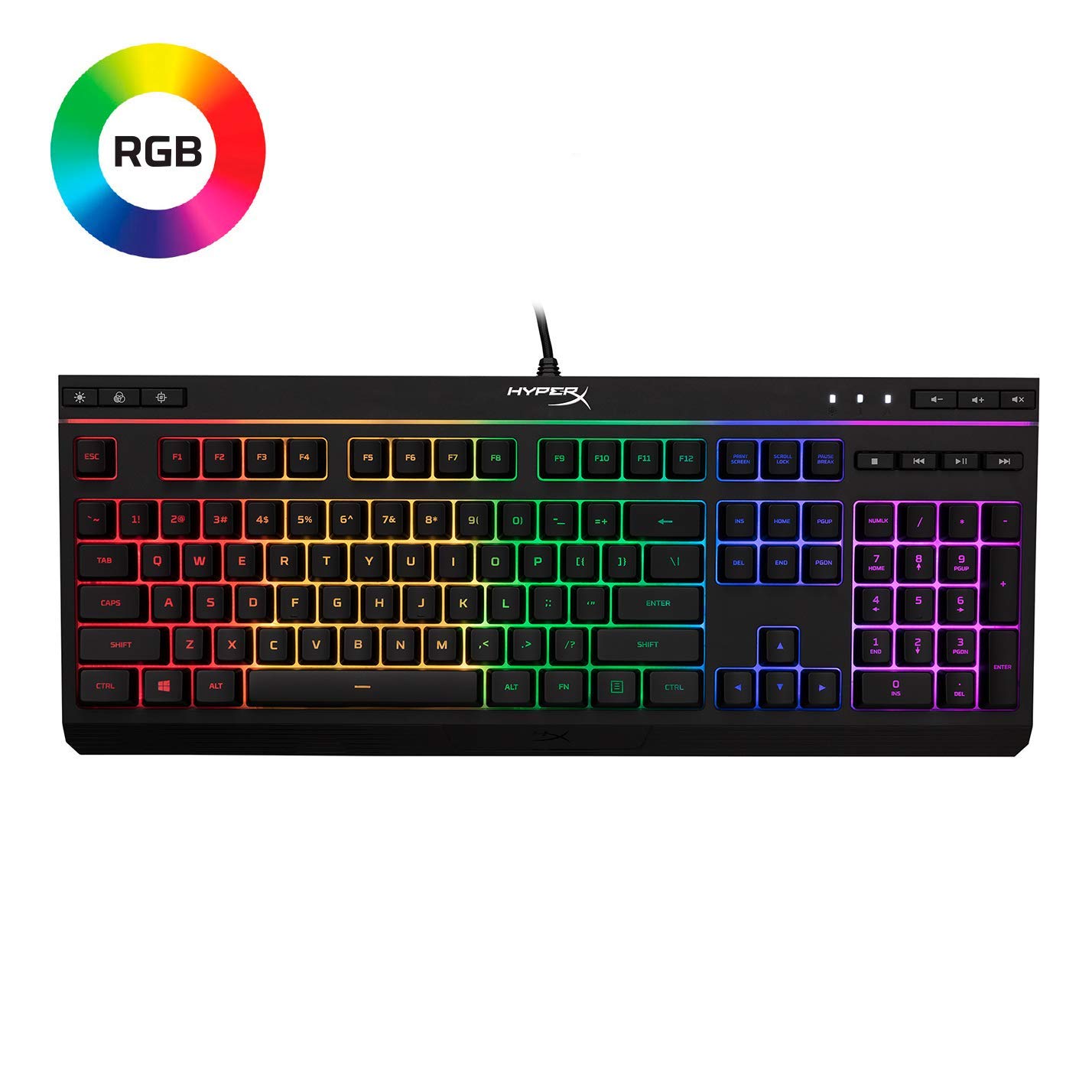 With a price similar to the previous Devastator 3 combo, the Alloy Core RGB is a great buy if you’re looking to spend less than $50 but want full RGB backlighting.

One drawback is the fact that the Alloy Core RGB does not feature mechanical switches. Instead, it uses rubber dome switches with a semi-tactile feedback. The noise is almost non-existent so this makes for a great keyboard for anyone who dislikes loud/clicky keys.

This keyboard also features dedicated media controls (including volume control) but does not feature any F-key controls or extra programmable buttons.

The HyperX Alloy Core RGB is a great keyboard option for anyone who wants vivid RGB backlighting and doesn’t care too much about having mechanical switches. 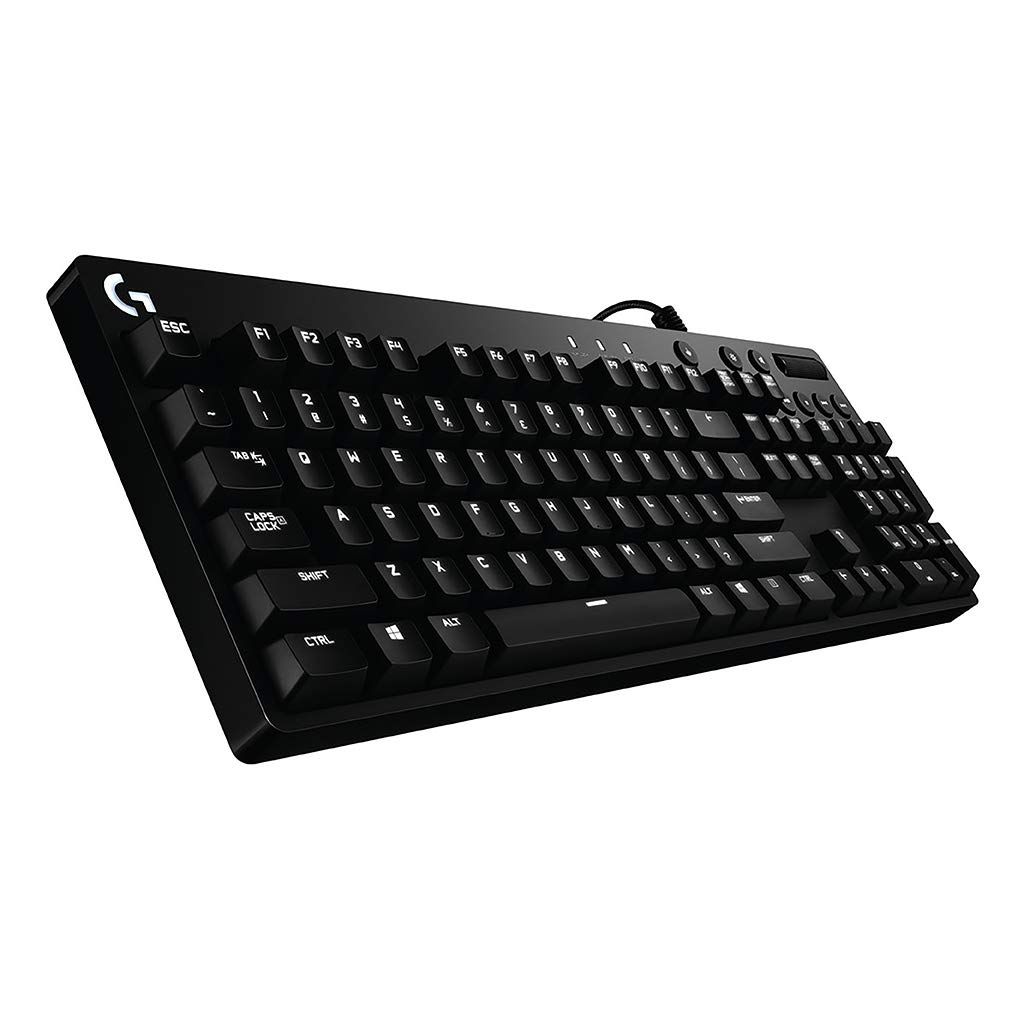 Logitech’s G610 Orion is an all-around incredible keyboard in terms of sheer quality.

It features your choice of Cherry MX Brown, or Red switches and combines these with the incredible versatility you get out of a Logitech keyboard.

Although it doesn’t offer as many programmable G-keys as say a G510s, you can customize the function keys with custom macros using the Logitech Gaming Software – probably not useful to everyone, but definitely a selling point for some!

The adjustable backlighting is an interesting feature if you’re concerned about missing certain keys in a game. You can customize the backlight on certain keys to be brighter or dimmer than others, so you’ll never miss an important spell again! Honestly, this is kind of a novelty feature to me, but I can only imagine that it’ll help out a lot of people in lots of different games.

Overall, the G610 Orion is attested to by numerous reviewers and long-time gamers.

It delivers great performance, utilizes Cherry MX switches, and leaves out the useless flair by delivering a more minimalist look – what more could you want? 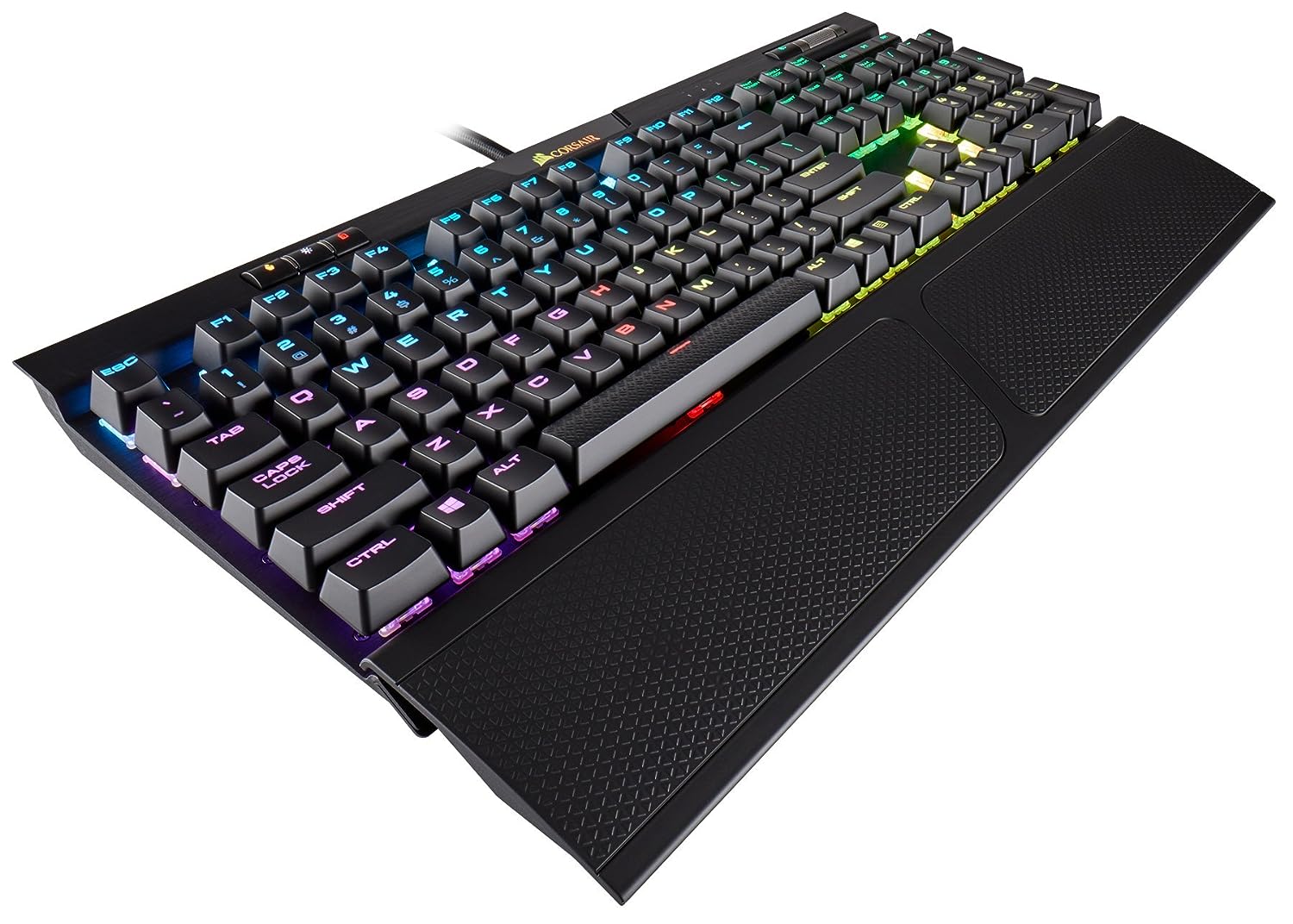 Corsair’s K70 RGB MK.2 is a great option when it comes to picking out a top-level gaming keyboard for just a little more than $100.

The detachable wrist rest is fairly decent and is actually pretty comfortable – something I’ve found uncommon with most wrist rests that come with a keyboard.

Corsair also gave the K70 RGB MK.2 its own dedicated media controls including an awesome volume “roller”. This style of volume control is much superior and faster to use than +/- buttons. Not enough keyboards include a roller vs buttons, probably because it costs more.

As the name insinuates, the K70 RGB MK.2 comes with fully customizable RGB backlighting. It’s honestly some of the cleanest backlighting I’ve seen used on a keyboard.

At the end of the day, it’s hard to beat Corsair’s K70 RGB MK.2 in terms of sheer quality.

Featuring a brushed aluminum frame, very clean RGB backlighting, and Cherry MX switches, this is a must-have keyboard for the most hardcore gaming enthuthiast.

With so many keyboards to choose from, it’s easy to make the wrong decision. Hopefully, you were able to find a keyboard on this list that you liked.

If you’ve found a different keyboard that you’d prefer not listed here, feel free to ask us about it in the comment section! We would be glad to give our opinion.

Hey, I'm Branton. I started RTR to give you awesome and unbiased random tech reviews.
Thanks for stopping by!

Random Tech Reviews is where you come to find the best unbiased and objective reviews of all things tech!
Thanks for stopping by!